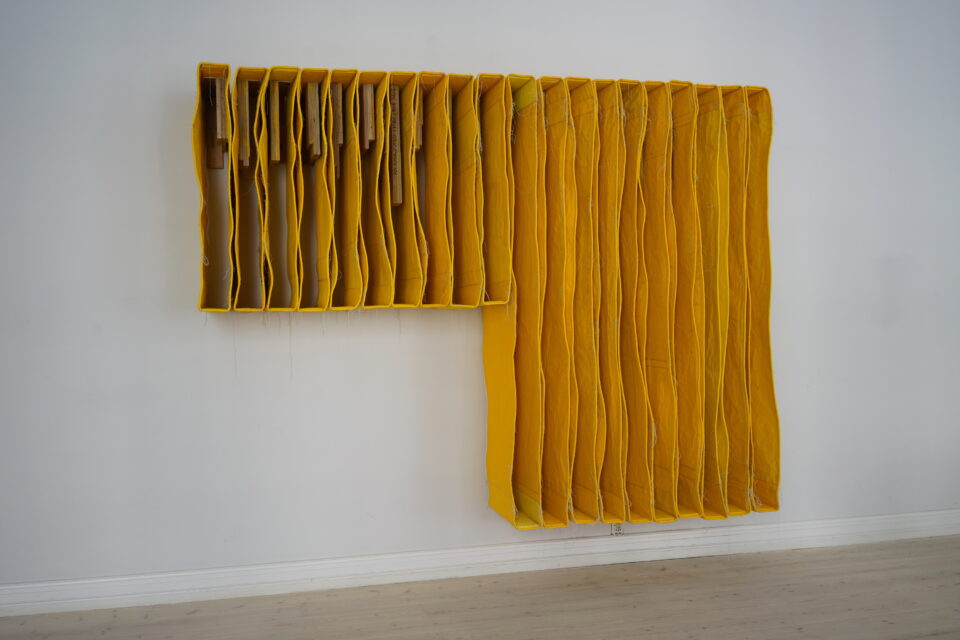 I am a painter. In order to understand what painting can do today I have made works that exist on the margins of what can be understood as painting.

I have written the word ‘invert’ on my studio wall. It reminds me, when I am working, that I must invert and subvert the conventions and traditions of painting if I want to find new forms and new functions for it.

I make physical paintings and an encounter with one of my works is not solely a visual experience. The paintings are constructed in such a way to encourage movement to explore them from left to right and from outside to inside. The word ‘painting’ is a verb as well as a noun. It is important to know what a painting does as well as what it looks like.

In my early London paintings from the 1990’s onwards I was working to develop the physical qualities of non-image based work. These early works were stretched canvasses and I used oil paint, primarily lead white and pencil or oil pastel. They were in line with the conventions of the European tradition. These paintings referenced the urban environment. They were designed to slow down the perception of the viewer and to be luminous. I have collaborated with archaeologists from the School of Archaeology, University of Oxford, for many years. The visceral and temporal qualities of the excavation sites gave me many things to think about – they are so rich in material, form, colour and characterised by a tangible sense of time. Working alongside archaeologists educated my senses and I learnt to understand and respond to landscape as material. The resulting paintings have roots in the British landscape tradition but the intention of the work has been shifted to offer a broad sensory experience rather than a visual depiction. I called the resulting works ‘Pit Paintings’. They expose their interior spaces and voids, which are as important an element as any flat front plane. They introduce movement into the equation for the viewer and undermine the convention that paintings have a static and single viewing point. I have made sculptural works, in particular ‘Trench 10’, a central element of the Segsbury Project, 1996- 2003, but it was always in the service of trying to understand the parameters of painting and the relationship of time to material. The fabric I use to make my works is 15-ounce cotton duck canvas. It is a traditional material of painting. I am interested in it for its own physical qualities not just as a support for an image. I buy 50 metre rolls of canvas, which I wash in hot water to remove the starch the manufacturer puts in it to make the cotton rigid enough to weave. I lay out long lengths of the washed canvas on my studio floor and then I soak my own paint into the fabric. It is dry pigment mixed with rabbit skin glue size. This medium is called distemper and its dries to a non- reflective matt surface. It soaks into the fabric and the pigment is caught in the cotton fibres rather than sitting on the surface like oil paint. This is my raw material. Other works are called ‘Wallspines’. They are rectangular canvas sections that are hung next to each other at 90 degrees from the wall. They are the conventional rectangle form that is common to most painting turned sideways. Since my rectangles have no sides (they have no stretcher) you can see inside them. The edges of the canvasses line up and form a number of repeated vertical lines. I am drawing lines – not with a brush or a pencil but physically with the canvas itself. I leave all signs of how the works are made, and how they are supported on the wall, as an integral part of the finished painting. This year I have been in Rome at the British School as an Abbey Fellow in Painting. I have come to see the historical links that painting has with sculpture and architecture. In Rome I took lengths of canvas out into the city to mark and cut the fabric in contact with the hard surfaces of the walls and the streets (a development of contact paintings made in London and in landscape on excavation sites). These elements are stitched together back in the studio to take their form as a painting. These paintings share qualities we associate with architecture and sculpture and I embrace it. We live in an emphatically image-based culture. The stress on the visual in everyday life inevitably suppresses the other senses. It is my hunch that painting – a medium so implicated in the development of image – is the medium best placed to critique the way we use images in contemporary life. I am working to give painting its body back and as a consequence, a better awareness of our own.