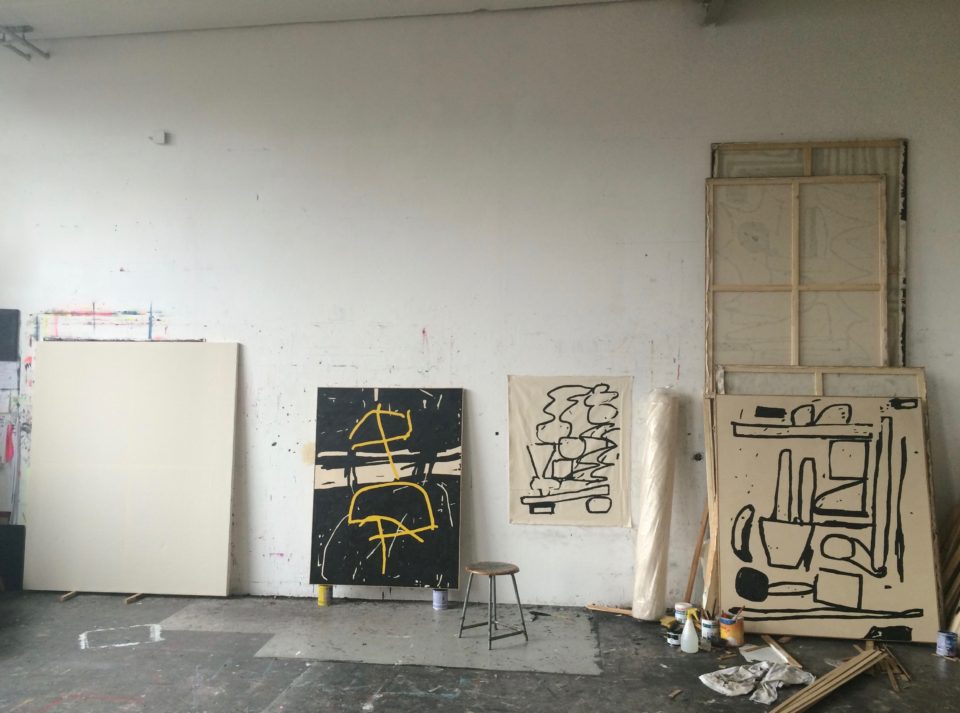 Wolfgang Voegele’s work shows a process from concept to intuition – always focussing the painting itself. Drawing on the very beginning of painting and art,

Voegele creates an own vocabulary by using archaic and simplistic forms and lines. These compositions are based on a computer-generated sketch, which then are applied to the canvas – and fail by doing so. That failing in transforming sketch to painting is crucial for his work process: an accurate transformation is impossible and therefore fails, composition changes, painting sets in.

Wolfgang Voegele herewith provokes a collision of concept and painting. This approach can be seen within all of his work. Especially the black paintings seem to refer to print or etching at first appearance. But taking a closer look, an immediate form of painting will be revealed. After applying the computer-based sketch to canvas, a highly physical process starts: along the sketch, the artist applies black oil colour on canvas by scratching with a bristled and nearly broken brush. The physical energy of this act is transferred to the painting and the brushwork appears equally vigorous. In contrast to that gestural part, light and filigree lines within the composition are also delivered. Voegele adds, if any, selected elements of colour to his work. For the series of what he calls Cut Paintings for example, yellow is the only colour that works for him. The initial sketch therefore operates as a base for the painting process and will be rejected, will loose significance, will be filled with intuition and taken further by the artist’s act of painting. The initial concept from the beginning of the work process so becomes more and more irrelevant for the painting.

Following the intuition, coincidence becomes a certain part of the work process: Accepting the coincidence as a consciousness, elements of the artist’s surroundings, the studio ́s floor for example, are added to the painting.

Continuing with the use of archaic and simplistic forms the artist sometimes works with a different approach to it: In place of a composition of various forms, Voegele here works with a simple amount of geometric forms. He eliminates, combines, multiplies and mirrors these forms in a intuitive way and therefore starts a complete new development.

This intuitive process never seems to be done. The artist produces a completion by attaching a wooden frame to the paintings. As a certain part of his work, the frame provides a defined space for the painting and even gets a part of it.  Taking a second closer look, lines and forms in Voegele’s work seem to result in representational elements: a forest, clothes, bodies.

But as soon as the spectator spots anything that seems to be physical and tries to integrate it into the entire artwork, the seemingly representational elements vanish. Only landscapes sometimes allow associations, which work in context of the entire piece.