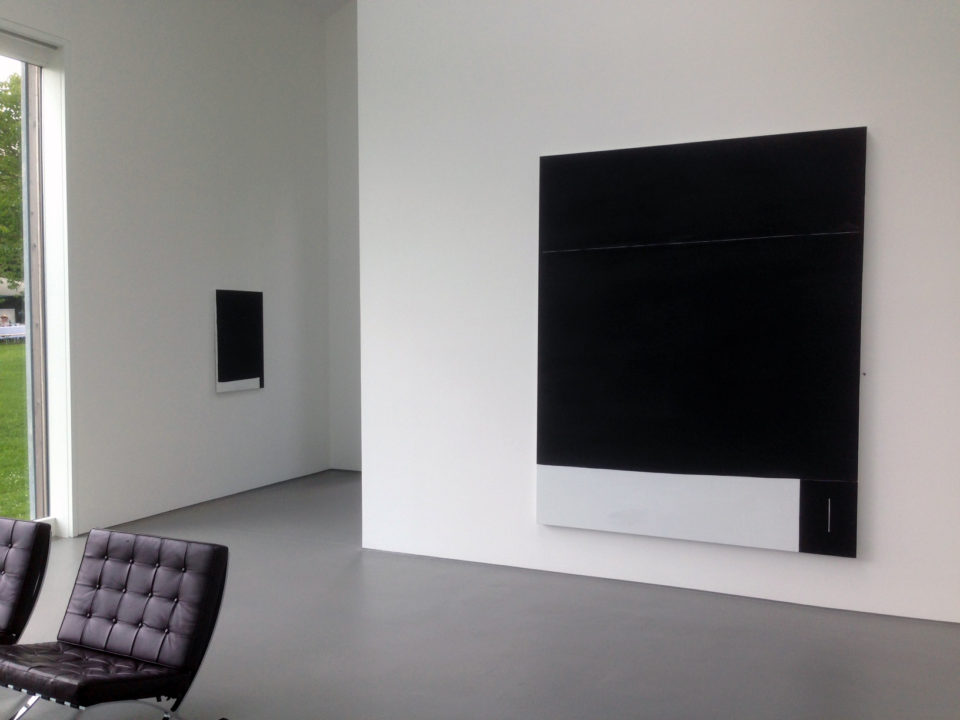 The N-paintings seem to lack “color” but the often thinly painted black and white forms are not monochromes. André Butzer is a colorist, “I will always be a colourist and nothing else” and the color choice of black and white is the result of the inclusion, or acceptance, of all existing hues; the destination, or starting point, of color potential.

The N-paintings also lack “figures” but the tonal rectangles upon rectangles within rectangular canvases are not a minimalist movement. Visually deviating from Butzer’s previous vivid surplus of figurative expressionism, the N-paintings are painterly, but as with his approach to color, the pictorial state has reached a density so intense that all figurative indications obliterate, or merge, into what appears to be singular non-specific entities: Bild(overarching German term for image, picture, painting, holy field). While the N-paintings appear to depict rectangles, they are in fact not, because Butzer neither believes in nor can physically recreate the “earthly measurements” that constitute a scientifically geometric rectangle. Butzer clarifies the difference between “real world” and “artistic” geometry- the latter of which does not adhere the former’s constraints. Butzer is interested in artistic perfection, what we see is Butzer’s “painterly geometry” which “is about Heaven, God, N; something other than the world and the rules applied within the world we exist in.” This dematerialization of form directly displays the infinitely enduring potential of all possible imagery due to its lack of constraints of conceptual and physical properties (fixed imagery); it is the birthplace of imagery, “it is where all I made came from and all I will make will come from.”

The N-paintings are an unreachable, un-picturable likeness of N, presented in the only way that a non-space can be, through a medium unapologetically and acknowledgingly unable to represent reality and remaining parallel: painting. The non-chronological nature of painting is “made to be the medium of N because it is about relation and proportion, never about time, process, progress or accumulation.” And for the paintings which appear to deviate from the specific visual nature of the N-paintings, such as Butzer’s addition of his first post-N [sic] work, a chromatically-rich figure painting, there is no difference. Each is just as complex, neither is simplified, they “all belong together. The N-paintings are the true beginning.” Link to Q&A with Andre Butzer